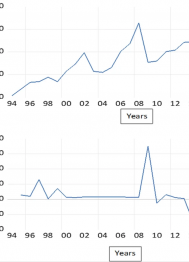 According to the Department of Environmental Affairs (DEA) (2019), maritime transport (ocean transport) refers to the transportation of people and goods via sea routes. The Maritime Transport Sector consists of a national registry, flagging, and cargo handling whereas while maritime manufacturing has to do with the building of marine vessels, rig and ship repair, and includes offshore oil and gas services. Maritime Transport has a system that is integrated which includes the design, construction, operation, management, servicing, and maintenance of merchant, leisure, and other ships in the service of seaborne trade. It also involves the conducting of offshore operations, port construction, shipbuilding, maritime services, and the transporting of people and cargo from point A to B by sea or via inland waterways. In addition, effective domestic demand and employment, which make a great contribution to a country’s economic development (Walker 2018; Shi and Li (2016); .

According to Stopford (1997) during the1960s maritime transport began, on a global scale, primarily using containers for large loads of cargo, and found these to be a useful and cost-effective cargo transportation mode over any distance by large boats or ships, and over oceans and lakes. This transport mode has since proved to be the most popular among people and companies engaged in international trade. However, while it is the least expensive and relatively environmentally friendly option, it is also the most time-consuming one. Its benefits also include transportation of large volumes of goods with low costs and the most used in modern societies.

According to the United Nations Conference on Trade and Development (UNCTAD) of 2019, maritime transport remains the backbone of global trade and manufacturing supply chains. UNCTAD (2019) reports that more than a quarter of world trade volume is done via ocean transport. Further, maritime transport handles 80 percent of trade by volume with approximately 70 percent of its value (UNCTAD 2019). According to the NCTAD report 2019, this trade has been linking global economics and has acted as a critical enabler of trade, an engine of growth, and a driver of social development (UNCTAD 2019). According to Rodrigue (2020) over centuries, maritime transport has played a major role in trade. Apart from representing a co-dependence between trade, shipping services, and the supply chain, it has generated measurable social and economic gains. Further, it also plays a vital role in bringing together maritime transport providers and users, and all the parties in the international supply chain to work together for the benefit and profitability of a trade.

Maritime transport is not only faced with rapid growth in demand and pressure from transport services, but also technical challenges which include outdated infrastructure which results in congestion and causes delays. Further, this includes a lack of investment for upgrading and maintaining ports infrastructure [Department of Environmental Affairs (DEA 2019)]. In addition according to Operation Phakisa (2015), marine transport and manufacturing in South Africa are challenged by outdated, insufficient, and expensive infrastructure, lack of skills, limited support for market growth from public procurement, and limited support for a national ship registry or flagging of South Africa ship which hinders growth in the industry. These challenges in the maritime sector have increased a need to be addressed because the sector is crucial in the economic development of South Africa. Traditionally, the public sector plays a key role in financing maritime transport infrastructure, however, public sector investment is not enough to cater to the growing finance gap in maritime transport. To ensure consistent growth demand and ensure proper services delivery mobilizing public and private is necessary which also includes FDI, development aid to participate in a partnership.

South Africa is a primary goods export-oriented economy. The total cost of importing foreign-produced products and delivering their agricultural produce, minerals, and other industrial outputs to foreign markets is impacted significantly by the transportation element. Transport is a significant trade input cost due to our distant location from the markets that we serve. There is therefore the need to strive for national transport cost efficiencies to remain globally competitive as a country. Although this validates South Africa as a maritime trading nation, it is, however, not yet a significant ship owning or ship operating nation. It is currently a consumer of international maritime transport and hence this component represents a significant expense item for South Africa’s international trading system. This creates an economic imbalance, which if not addressed, will continue to facilitate the loss of much-needed revenue, economic opportunities, and related jobs for South Africa and the South African Maritime Transport Sector. The ability of South Africa to carry its import and export trade has suffered a negative growth since the 1980s. South Africa does not have a national shipping carrier. This sector has the potential to offer significant employment opportunities for thousands of South Africans across the diverse expertise required in the various disciplines of the sector that include marine manufacturing and related services, seafaring, maritime law, research, marine engineering, etc.

To date in South Africa, the government has played a key role in financing maritime transport infrastructure. However, public-sector investment is not enough to cater to the growing financial shortfall in the maritime transport sector, due partly to its decline, as mentioned above. To ensure consistent growth demand and proper service delivery of maritime transport, the mobilization of both the public and private sectors is necessary. This includes the participation of foreign direct investment (FDI) and development in partnership.

A review of the existing literature has shown other studies to have investigated the impact of port infrastructure and trade or economic growth (Ismail and Mahyideen 2015; Kazutomo and Wilson 2019; Jouili and Allouche 2016; Igberi and Ogunniyi 2013) and whilst other literature focus on the impact of investing on port infrastructure and international trade and economic growth and few studies that focused on marine transport and international trade. There is limited literature on marine transport in the South Africa context and more especial that focusing on investing in maritime transport. Therefore, this study examines the impact of maritime transport financing on total trade in South Africa using the autoregressive distributed lag (ARDL) model. In this instance, this study fills a gap in the existing literature in the sense that a large number of studies in this area used models of analysis such as structural equation modeling (SEM), Generalised Method of Moments (GMM), and pooled mean group (PMG) estimator. None of these studies have attempted the use of ARDL.

The paper is organized into six sections: the first section is introduction and background, followed by an overview of marine transport financing and trade in South Africa, literature review which includes theoretical and empirical review, outlines the methodology, indicating the variables used in the analysis, and describing the econometric model, analysis and discussion of results and the last part is conclusion and recommendations.

According to Funke et al. (2016), South Africa's coastline is about 3924 km of and a total sea-land exceeds the total ears of the country’s land size. Approximately, 30 percent of the population in South Africa lives around the coast. The position of the country is around on a major shipping route and has eight commercial ports and 44 non-commercial harbours. South Africa's trade to GDP ratio for 2019 was 59.20 percent, while imports and exports at the time were approximately 60 percent of South African Goss Domestic Product (GDP) (UNCTAD 2019). This is an indication of the extent to which the South African economy is dependent on trade. South Africa is not close to its trading partners or markets, however, it concentrated on a major sea trading route that connects American and Asian markets. The maritime interest of South Africa originates from its geo-economic structure and trade (Ntuli 2017). It is for these reasons that, as has already been mentioned, the maritime transport sector has the potential to contribute significantly to economic development.

The ninth Sustainable Development Goal (SDG target 9) highlights the critical trends in maritime transport infrastructure and services that underpin trade, supply chain linkages, and economic integration. According to DEA (2019), investing in maritime transport is the critical vein feeding the blood circulation system of South African economic development. Most of South Africa's trade is characterized by seaborne and moves within a system of commercial ports of the country. As has been mentioned, in South Africa, seaborne trade is estimated to account for between 80 and 90 percent of the economy South African maritime transport owes its evolution to the development of international trade and the ever-growing exchange of goods between countries (Shi and Li 2017).

In 1994 the total trade rate was approximately 40 percent, and the trade policy regime that was adopted at that time by the democratic government began the transformation of the South African economy. This resulted in a dramatic expansion of trade to expand over the period 1994 to 2001, from 40 to 59 percent (Edwards and Schoer 2002). According to World Trade Organisation (2019) during 2019 South African exported USD 90 Billion while importing USD 107 Billion of goods and it shows an increase in the volume of exports and imports. Further, its export services are valued at USD 14.3 billion and while imports services are valued at 15.3 USD billion. Therefore, the country has a recorded trade surplus valued at USD1.7 billion.

The Maritime Transport Sector is one of the key economic sectors instrumental in the future unlocking of the country’s ocean economy to promote growth in the economy (Ntuli 2017). As has been mentioned, it is one of the means of achieving the objectives outlined in the 2011–2030 National Development Plan (NDP) and the New Growth Path (NGP). According to Morapedi and Makhhari (2017)) have highlighted that the National Transport Master Plan (NTMP), has strategies to deal with challenges that affect infrastructure on maritime transport to meet 2030 targets goals. 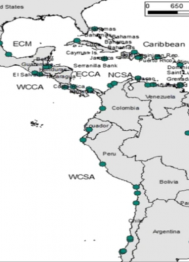 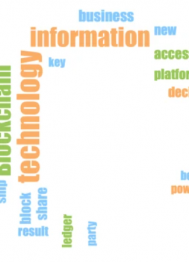 Review of studies of blockchain technology effects on the shipping industry